Normally, I use CE with RE configuration as a current source to drive LED as shown in the following figure. In this circuit, laser diode ADL-65055TL from Laser Components was used. Its operating current is 25mA, maximum current is 35mA, and operating voltage is 2.2V. 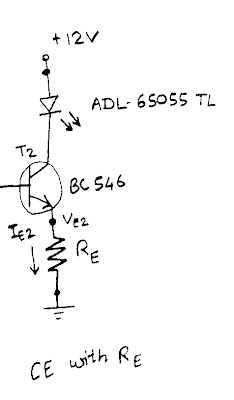 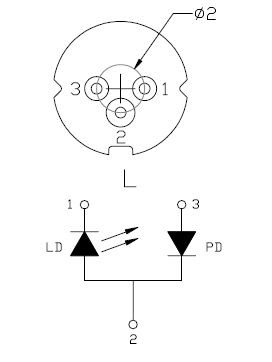 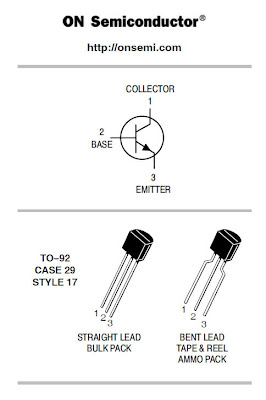 For a 12V power supply, assuming VCE(saturation) is approximately zero, RE is calculated as $$ R_E=\frac{Vcc-V_L}{I_{max}}=\frac{12-2.2}{35m}=280 \Omega $$ I did not want large gain for this CE configuration and bypass capacitor was not used. I wanted the ac output current of this class A amplifier to swing between 23mA and 29 mA. Using the quiescent emitter current for transister 2, IE2=26mA (near operating current), emitter voltage is, VE2=RE x Iop= 280 x 26m = 7.28V. To achieve high input impedance, a CC amplifier was cascaded in front as shown in the following figure. 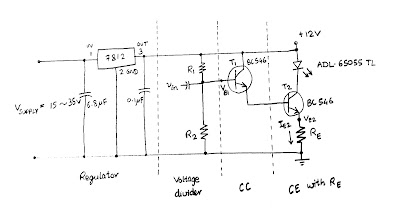 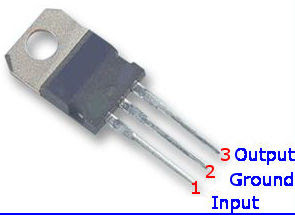 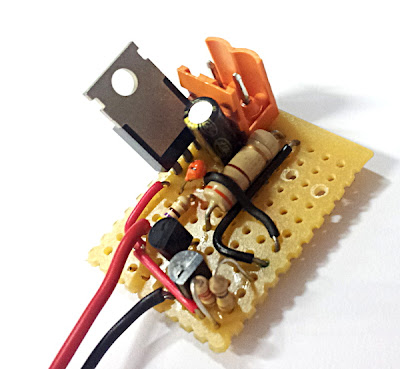 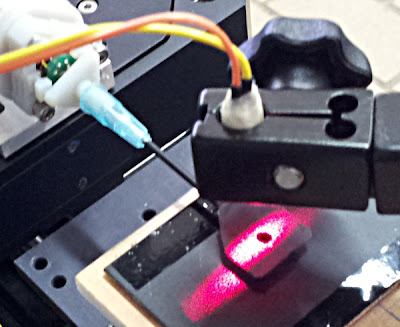 Posted by Yan Naing Aye at Wednesday, December 19, 2012 No comments:

To properly render Myanmar fonts using LaTeX, it is necessary to use TeX typesetting engines that support Unicode such as XeTeX and LuaTeX. You should make sure that your TeX Live or MiKTeX version is up to date and XeTeX and LuaTeX are bundled with them. To build TeX files conveniently, you can define user command in editors such as TeXmaker or TeXstudio. In TeXstudio, click Configure TeXstudio... command in the Options menu. Then, go to Commands and copy the command for the PdfLaTeX. 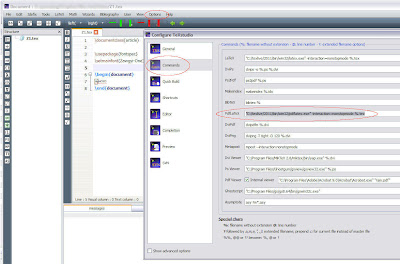 After that, go to User menu and click User Commands -> Edit User Commands and click green plus sign. Paste the command that you have copied and replace pdflatex with xelatex for XeTeX. Follow the same procedure and use lualatex for LuaTeX.

The following example TeX file, Z1.tex, works with both xelatex and lualatex. Another example for lualatex that includes lua script is luaZ1.tex. I have tested laulatex with Zawgyi-One, Padauk, Myanmar3, and Myanmar MN. And I found that only Zawgyi-One works with current version (LuaTeX, Version beta-0.70.1-2011082320). 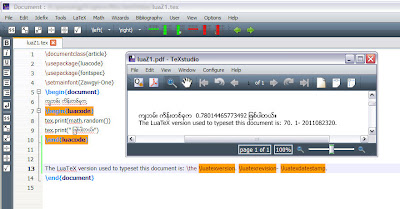 XeTeX can render Zawgyi-One and Padauk on all platforms, and Myanmar MN on Mac OS X. Although there is no problem for Zawgyi-One, Unicode fonts such as Padauk require renderer to be defined. In the following example, Renderer=Graphite defines Graphite as the renderer. For Myanmar MN font, the renderer should be explicitly defined as Renderer=AAT. See example XeFontspec.tex as shown below. 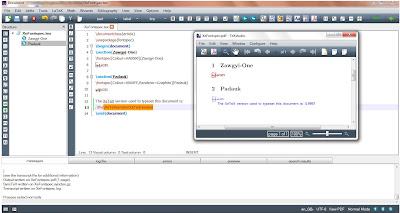 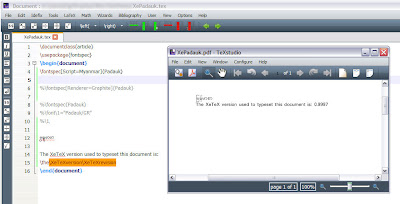 An example for Myanmar MN is XeMyanmarMN.tex. Currently, according to my tests, Myanmar3 does not work on all platforms.

TeXstudio (formerly TexMakerX, http://texstudio.sourceforge.net/) is an integrated environment for writing LaTeX documents. When you get a paper, there is normally the citation for that paper in BibTeX style. You can save the BibTeX entry for each paper in a BibTeX database file that has .bib file extension. In TeXstudio, it is also easy to create a BibTeX entry yourself. For example, create a new BibTeX database file, Ref1.bib and click bibliography menu. Thereafter, you can choose the command for your paper type. Both the required fields and optional fields will be inserted. If you want to clear the optional fields, you can click the clean command. The easiest way is to use BibTeX insert dialog ... as shown in the following figure. 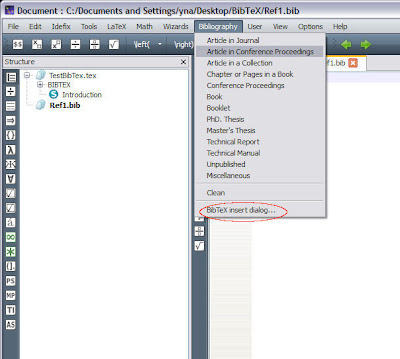 When the new BibTeX entry dialog appears, you can fill the fields you want and click OK. When you filled the author names, they must be separated by the word and. Create a new TeX file, e.g. TestBibTex.tex, and you can use the database as follows. In this example the popular style, ieeetr, is used so that the references will be numbered in order of appearance. The database file, Ref1.bib, that you created is included using \bibliography{Ref1}. 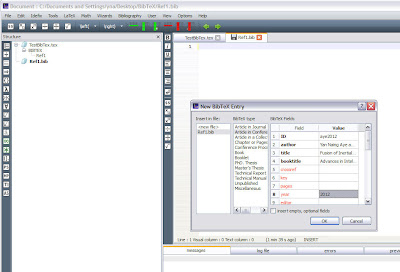 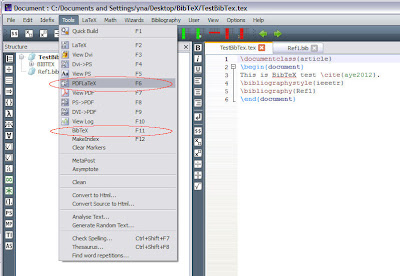 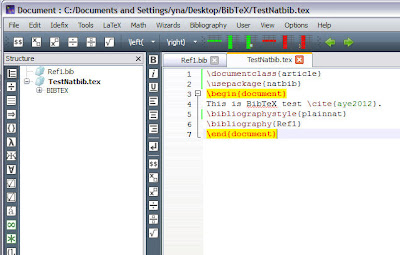 The example files can be downloaded in the following links.
TestBibTex.tex
TestNatbib.tex
Ref1.bib
Using a software for management is more convenient and JabRef Reference Manager is a good one.
Ref: http://en.wikibooks.org/wiki/LaTeX/Bibliography_Management
Posted by Yan Naing Aye at Friday, June 08, 2012 No comments:

The structural shape of an image region can be represented by a graph. It is achieved by using a thinning algorithm. The resulting graph is called the skeleton of the region. It can be a useful preprocessing step for some applications such as optical character recognition. The following figures shows an original structural shape and its skeleton.

Two Step Thinning algorithm is more efficient and faster than MAT. Two step thinning algorithm iterately delete edge points of a region subject to the constraints that deletion of these points does not remove end points, does not break connectivity, and does not cause excessive erosion of the region. The region points are assumed to have value 1 and background points to have value 0. The method consists of successive passes of two basic steps applied to the given region. 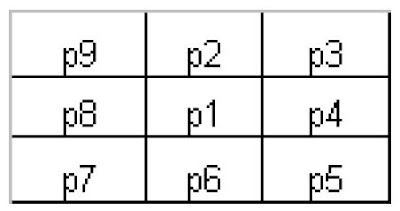 With reference to the 8 neighborhood notation shown in the figure, step 1 flags a contour point p1 for deletion if the following conditions are satisfied: (a) 2 ≤ N(p1) ≤ 6 (b) T(p1) = 1 (c) p2.p4.p6 = 0 (d) p4.p6.p8 = 0 where N(p1) is the number of nonzero neighbors of p1, and T(p1) is the number of 0 to 1 transitions in the ordered sequence p2, p3, ... , p8, p9, p2. In step 2, conditions (a) and (b) remain the same, but conditions (c) and (d) are changed to (c') p2.p4.p8= 0 (d') p2.p6.p8= 0 Step 1 is applied to every border pixel in the binary region under consideration. If one or more of conditions (a)-(d) are violated, the value of the point in question is not changed. If all conditions are satisfied the point is flagged for deletion. However, the point is not deleted until all border points have been processed. This delay prevents changing the structure of the data during execution of the algorithm. After step 1 has been applied to all border points, those that were flagged are deleted (changed to 0). Then step 2 is applied to the resulting data in exactly the same manner as step 1. Thus one iteration of the thinning algorithm consists of (1) applying step 1 to flag border points for deletion; (2) deleting the flagged points; (3) applying step 2 to flag the remaining border points for deletion; and (4) deleting the flagged points. This basic procedure is applied iteratively until no further points are deleted, at which time the algorithm terminates, yielding the skeleton of the region. Condition (c) p2.p4.p6 = 0 and (d) p4.p6.p8 = 0 are satisfied simultaneously by the minimum set of values; (p4 = 0 or p6= 0) or (p2=0 and p8=0). Similarly, conditions (c') and (d') are satisfied simultaneously by the following minimum set of values: (p2=0 or p8=0) or (p4=0 and p6=0). The example MATLAB code for Two Step Thinning algorithm can be seen here (TSTeg.m).

The above codes may be useful to understand the methods and to implement them in other programming languages. In MATLAB, the skeleton of all regions in a binary image is generated via function bwmorph. sk=bwmorph(bwImg,'skel',Inf); The result of the above operation is shown below.