In serial communication, data bytes are sent bit by bit. Its advantage is that data can be sent using only one wire instead of using many parallel wires. But it needs a UART to convert data byte to serial bit stream.
UART not only converts data into serial bit stream, but it also format the bit stream into Asynchronous Serial Communication Protocol by inserting start bit, parity bit, stop bits, etc.

In idle state, a UART normally puts its output in 1. The receiving UART needs to differentiate whether the 1 is data to receive or idle state to ignore. Start bit is used to solve this problem. Normally, a UART ignore 1 as idle. After it received the first 0 as start bit, it accepts the following bits as data for predefined number of bits.

Parity bit is used to check the integrity of the data. In even parity, the number of 1 in data bits and the parity bit itself is even. In odd parity, it is odd. Typically, parity bit is not used.

Stop bit is used to separate the consecutive data bytes. The number of stop bit can be 1,2, etc. 1 is used as a stop bit. Stop bits are sent after sending data bits and parity bits. A popular number of stop bit is 1.
The following example send the data byte 0x41 using 9600, 8N1. That means
Baud rate = 9600
Data bit = 8 bits
Parity = No parity (N= No parity, E= Even parity, O= Odd parity)
Stop bit= 1 stop bit
Since it is no parity, stop bit will come immediately after data bit without any parity bit.

A UART can be in many different forms. The first one is in the form of a discrete IC. A popular IC is 16550. For CMOS, it will become 16C550, and so on. It has its own buffer and interrupt mechanisms. Therefore, it is easy to use. Serial data comes out from sout pin. Its basic configuration is as shown in the following diagram. 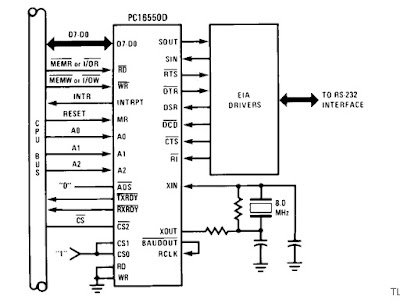 A UART uses 5V output to represent 1 and uses 0V output to represent 0. To connect to external devices, these output voltages are normally converted into suitable signaling levels by using a transceiver. A popular signaling standard is RS232. A RS232 transceiver outputs or inputs -10V for 1 and +10V for 0. Valid voltage range is from +/- 3V to +/-25V. A popular transceiver IC is MAX232. Its configuration is shown in the following diagram. 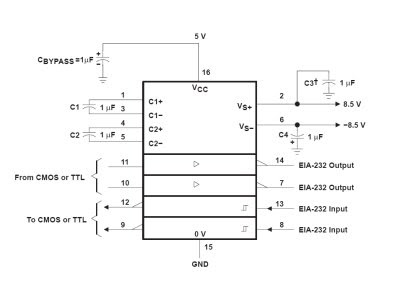 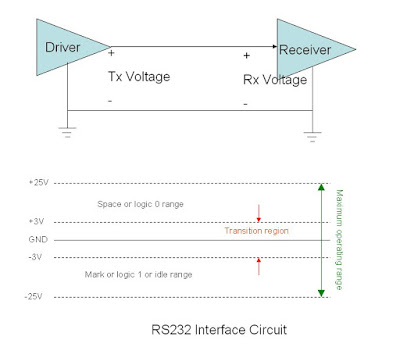 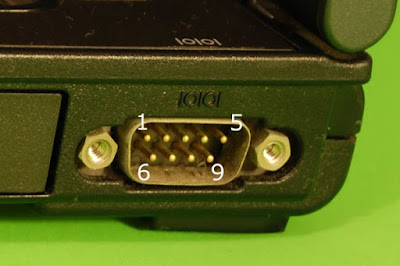 Pin connection of a female connector is also shown below. 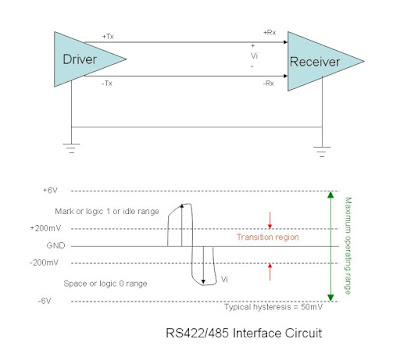 Note:
-200mV to +200mV = 0.4 V
-6V to +6V = 12V
Both RS232 and RS422 can have many receivers on a single bus line but they can have only one transmitter on a bus line. In RS485, transmit driver circuit can be enabled and disabled by using data enable line. As a result, it can have many receivers and transmitters on a bus line. Normally, RS422 uses two wires (+Tx, -Tx) for transmitting and another two wires (+Rx, -Rx) for receiving. Therefore, RS422 uses total of four wires. RS485 can communicate using only two wires for both transmitting and receiving in half duplex mode. RS485 can also be used in Full duplex mode using four wires. The following figure shows a typical connection for RS485 using MAX481 transceiver IC. It has only two wires to use in half duplex mode.

An example using MAX491 to connect RS485 in full duplex mode is shown below. If you connect +Tx and +Rx and at the same time -Tx and -Rx, it can be used in half duplex mode. 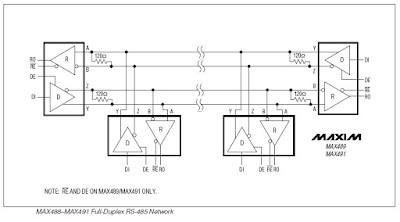 Actually, full duplex RS485 with four wires whose transmit driver circuit always enabled is same as RS422. RS422 is normally used to extend distance of RS232 communication. When the distance is too far to use RS232, RS422 converter can be used in transmitting side and receiving side can convert the signal back to RS232.
In case, you want to use RS422/RS485 input device with RS232 output device without converter, you can directly connect RS232 Tx output to RS422/RS485 -Rx and RS232 GND to +Rx line. I tried it once before and it was OK. RS422, RS485 half duplex and RS485 full duplex connections are shown below. The first one is RS422 which can be used for only one to one connection. There can be many receivers, but there can only be one transmitter in a bus line. We cannot control transmit driver.

Note that RS485 half duplex has driver enable and receiver enable. Typically, there can be up to 32 node in a bus line.